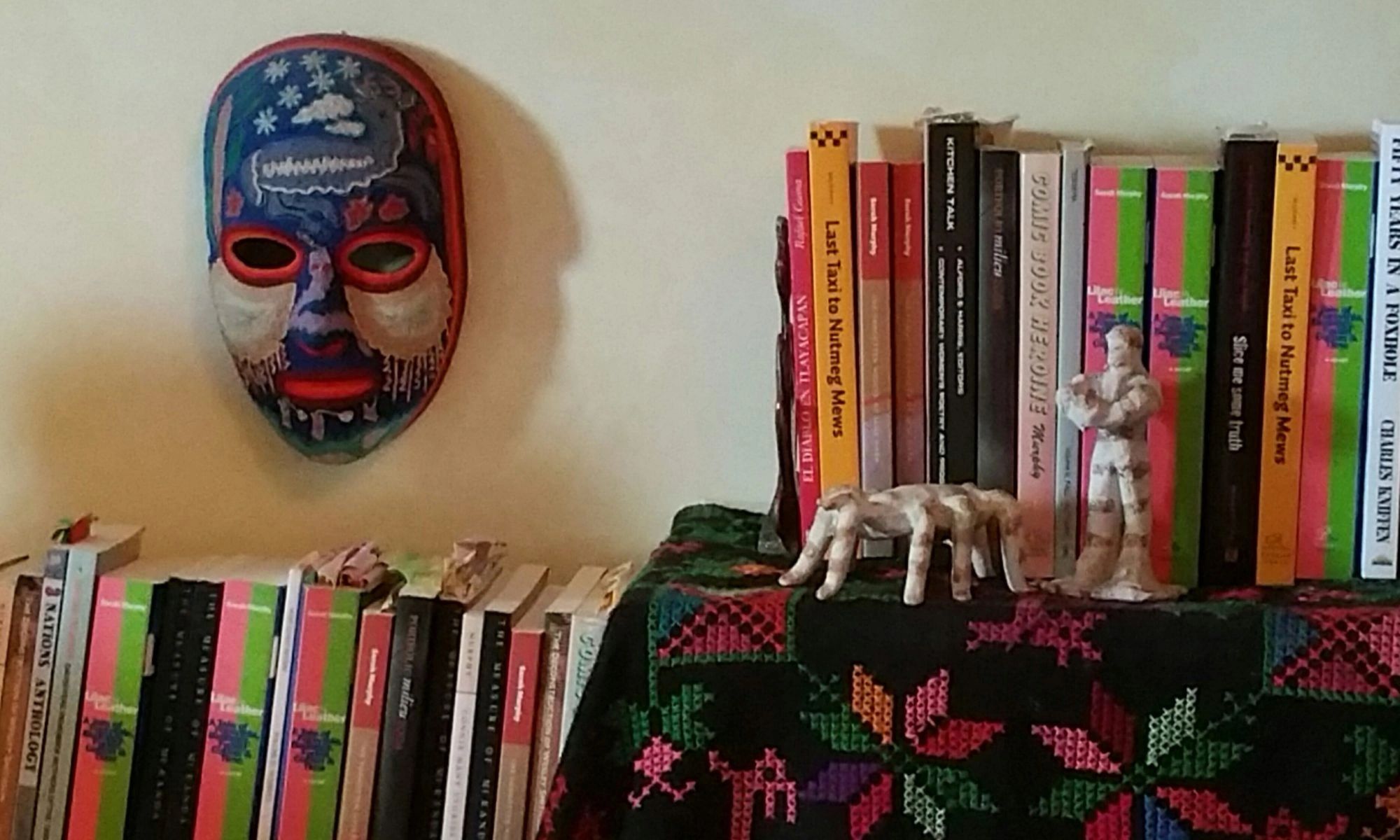 An Excerpt from Itzel I: A Tlatelolco Awakening to commemorate this October 2020 the 52nd anniversary of the Tlatelolco Massacre

Some blog posts also include videos

The Name of a Maya Goddess

On its own, find here the opening of Itzel I: A Tlatelolco  Awakening, Now winner of the New Brunswick Book Awards Mrs. Dunster’s Fiction Prize.

Even if I have already let the fiction begin in my mind. Already changed her name. Even if I know it would have satisfied her, the real her, when I let her speak it. Laugh at how it seems so strange that an Auschwitz survivor should bear the name of a Maya goddess. But of course such a name would already have to appear strange to me, the me who will be the author, because she was so very blonde. As I suppose the Auschwitz survivor part will too, almost devolving into one of the New York jokes of my Brooklyn childhood, always a punch line for something: Funny, you don’t look Jewish. Except that there is nothing funny about it. Which may be the reason, now, in front of my keyboard with Google Earth in another window, I will decide at last to write it this way: that it can be written this way. As this impossible hybrid.

Because I want you to know this: everything I say here about the camps was said to me. That part was real.

And so was she. This woman so very briefly my best friend. The first person to befriend me in Mexico, or whom I will befriend. And betray so badly. I still think that. Even if most might think from a superficial look at the circumstances that it was the other way around. So that a great deal more of all this is true too, certainly the part of Mexico I will be there for, in the making of its history, even the exact minute of the green flare falling from the army helicopter to begin the massacre at 6:10 in the afternoon of October 2nd, 1968. When I will see Itzel begin to run.

True as something of fiction always is. Though you can work out what yourself in the storyline, with its names changed to protect innocent or guilty, the details recombined mostly, only occasionally imagined. The way I will often do, in my head if not on the page: just to let me find the moral centre of my tale. But the specifics, the historical specifics: I will vouch for them.

Sarah Xerar Murphy is an uncannily gifted storyteller, and Itzel I: A Tlatelolco Awakening is a wild and wildly urgent read. In a style that evokes Latin American literary masters, Murphy brings us into the lives of Itzel, Basta, and Nauta and the Mexican student movement of 1968 with prose that is as playful and tender as it is fierce and subversive. This book is innovative, thought-provoking, and profoundly affecting.

Itzel ― a novel in two volumes

From the concentration camps of Nazi Europe to the docks of fifties Brooklyn to Mexico 1968...

An older woman who spent her eighteenth year in Auschwitz. A younger one who used her nineteenth to organize against the war in Vietnam in New York. An economics student who despite his radical convictions works for the Mexican stock exchange. Mexico 1968. A year, a student movement, a friendship and a massacre which changes all their lives forever. This is the stuff of Itzel, a two volume novel from Sarah Xerar Murphy, the woman who lived it.

In the first volume Itzel: A Tlatelolco Awakening, published in the fall of 2019, Itzel herself is the focus as she blooms into her own agency, bravery, even heroism, possibilities she thought beaten out of her by the horror of the camps. The second volume, Itzel II: A Three Knives Tale just published in spring 2020, concentrates on Nauta, the narrator, to bring her face to face with her own violence and capacity for both betrayal and commitment in a series of harrowing scenes.

In the first we move into the time of the Tlatelolco massacre, in the second into that of the Halconazo, also called El Masacre de Corpus, the demonstration of June 10th, 1971, re-enacted in Alfonso Cuarón’s Roma, which—though bloody—through the response of public and press corps, successfully called the government to account. This volume is dedicated to Armando Salgado, the photographer whose images changed Mexican history. The first is dedicated to artists Guadalupe Otero and Jorge Antonio Perezvega, with whom the author shared art making in 1968.

From the working docks of fifties Dumbo to the concentration camps of Nazi Europe, the late-night meetings organizing the US antiwar movement of the sixties to the false bottom vans carrying Central Americans to Canadian Sanctuary in the eighties, Itzel takes us on a whirlwind ride through our continental heritage even as its narrator, Nauta, never an innocent abroad but once a knife-wielding Brooklyn tomboy, contemplates her own coming of age. The bi-racial, bilingual and multicultural background of award-winning author Sarah Xerar Murphy, a long-term resident of all three of North America’s largest countries, makes hers the perfect voice for a story of such breathtaking scope.

launched this Spring 2020 from Guernica Editions—excerpt in video below

.....maybe there will be a moment there I still could have laughed. Joined him. But it’s the thought of the blade that will do it. I will be mesmerized. As if I am back there. Looking at it. Seeing the one steel sharp glint that will spring me into action. And even the meaning of that scene will shift. The memory of what I’d done. What I’d wanted to do.

It was my fight, I’ll whisper: His bronca was with me. I had to take care of it. It was my job. Mine. To determine the outcome. And yes, you’re right, I do have experience. I did know what I was doing. And the blade isn’t in my corset. Or in the bra I don’t wear. Where the Brooklyn street whores carry their razor blades. It’s here. In my pocket. It’s how I’ve lived.

I will not be chattel, I’ll go on: I will not be chattel, repeating it between clenched teeth. Though it will likely not have been so elegant, I’m not sure I even know that word chattel in Spanish, it is among the properties of automatic translation that you sometimes clean up and polish the words you’re working with in your mind before you even know you’ve done it, so it will probably be more like: No soy la puta propiedad de nadie. I’m nobody’s fucking property. Or its equivalent. Because I am pretty sure I’ll use that word puta, though maybe that’s the intervening years translating themselves too, puta is probably the most common adjectival expletive in the Spanish speaking world, just not necessarily first choice in Mexico. But I like it: neither puta nor propiedad. Neither whore nor property. It still makes great sense to me ...

Sarah Xerar Murphy reads a scene in which Nauta, the narrator, becomes aware of what could have resulted from an incident only hours before as El Flamenco, a divemaster she has recently met, a man also involved in the confrontation, talks her through it.

Join me to see what's happening

the critically acclaimed author of multiple works of fiction and memoir is also an Interpreter, translator, community activist, and teacher, as well as award winning performance, visual and spoken word artist, Brought up in New York and a subsequent resident of both Mexico and Canada, she currently lives in Passamaquoddy Territory in Bocabec, New Brunswick.

Her bi-racial, bilingual and multicultural background combine with her long-erm residence in all three of North America’s largest countries to bring electrifying authenticity to her creations. You may also know her simply as Sarah Murphy, the Name under which she published her first books and other work.

Sarah Xerar Murphy was a finalist for The Brooklyn Film and Arts Festival's 2019 Brooklyn Non-Fiction Prize.

She has now won the New Brunswick Book Awards 2019 Mrs. Dunster's Fiction Prize for Itzel I: A Tlatelolco Awakening.

throughout this site some images will link to further pages